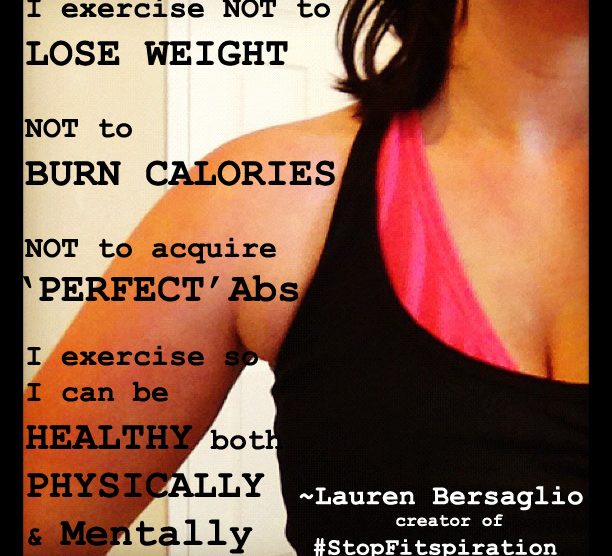 Recently I was given the honour of being asked by Bridget to be interviewed for a feature article she is writing on “use of social media in the proliferation of health and fitness images and notions”. Bridget’s questions covered so many important issues, that I asked if I could publish a copy of the interview here on Libero (to which she said yes). I want to thank Bridget not only for taking the time to listen to what I have to say but for her interest in contributing to the conversation revolving around Fitspiration. 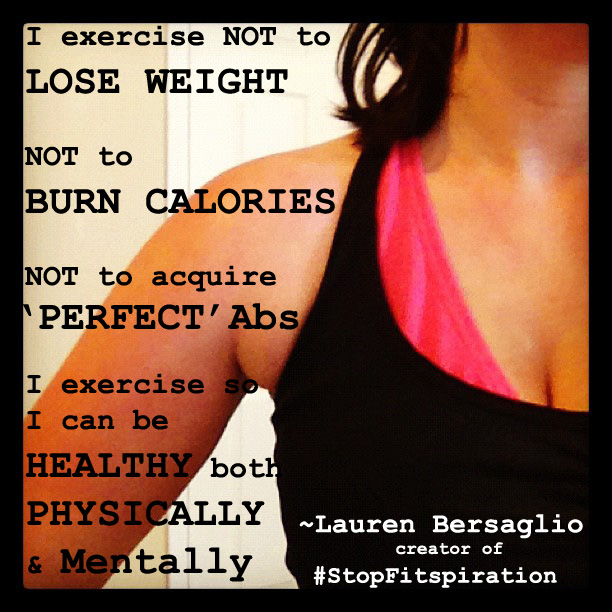 Do you think that humans find it difficult to achieve balance or a happy medium (are we naturally engineered to be obsessive?) – which results in the popularity of fad diets and fitness concepts, which don’t actually work in the long run?

I don’t believe that we are naturally engineered to be obsessive. I believe that anything that is ‘innate’ to us, is actually meant for our own self-preservation. However, in a society where ‘busyness’ is idolized and ‘keeping up with the Joneses’ has become a legitimate goal, we find ourselves anxious, overwhelmed and stressed. And these feelings are easiest to forget or to ‘numb’ by distracting ourselves by obsessive behaviours – such as obsessive dieting/exercising.

I do believe that because we are told constantly throughout the day that we need to work harder so we can earn more money to have a bigger house and a faster car and be happier; and to eat ‘healthier’ so we can lose weight so we can look better and be happier, and to exercise more so we can appear stronger and therefore more attractive and, again, be happier, it is very difficult for us to find balance because we are always told to do more, try harder, be better, and we are deceived into thinking that is what will make us happy.

And in our anxious, depressed society, we will do anything to try to regain our happiness. Sadly, these messages are just leading us in the wrong direction (actually, the opposite direction).

Fitspiration aims to inspire, therefore you could argue that it’s not the images that are central to the issue, but the imputations of dedication and hard work. If the images were more varied – “real” people, communicating that there is not just body image that can be deemed “fit and healthy” – would Fitspiration be more effective and less harmful to body image perceptions?

I would disagree that it is only the images in Fitspiration messages that are harmful. With messages like “I don’t stop when I’m tired, I stop when I’m done” and “Pain is temporary, pride is forever” and “It takes 4 weeks for you to notice your body changing, 8 weeks for your friends, and 12 weeks for the rest of the world. Give it 12 weeks. Don’t quit.” The images attached are irrelevant. The messages stand alone as being harmful, and, in actual fact, not even true to the science behind fitness and exercise.

I was a Human Kinetics major in my first year of University and we learnt about healthy exercise and determining the right routine for your lifestyle vs. that of a professional athlete. We also learnt the signs, behaviours, and effects of overexercising and these messages go against all of the things we learnt were the correct way to ‘do’ fitness. We were never taught to ‘push through pain’ or ‘stop when you’re done’ – If you can’t workout anymore because you’ve depleted your energy, that is a sign that you are done, not that you should keep going. And pain, though a natural result the day after a workout (however, I must note that there is a difference between ‘good’ pain from your muscles being broken down from weight training etc.., and bad pain from overworking those muscles beyond their capacity) is not something that is meant to be ‘pushed through’ or, worse, strived for.

Add to these messages, now, the photo-shopped, heavily tanned, scantily dressed, ‘one size fits all’ images that appear in Fitspiraitonal messages, and you have a weapon for disaster. Because not only are you sending out harmful messages through words, which are accepted as ‘truths’ you are also sending out subliminal messages through the images that make people think that’s what ‘fit’ looks like, and anything less, is not healthy. When in reality, most of the models you see (though I can’t speak for how they look in real life without Photoshop) have a body composition that, with my experience, I would assume, though ‘larger’ than your average size 0 model may still have the same or just a slightly higher body fat % as the model (which is far too low to be considered ‘healthy’).

If these images did show ‘real people’ (namely: a variety of shapes, sizes, and muscle mass) not photoshopped and the messages leaned more towards fitness for internal health (in the same way that body positive images talk about beauty being an internal thing), then ‘fitspiration’ could be a positive thing; however, then they would lose the title of ‘fitspiration’ altogether.

What people seem to forget is that words tagged at the end with ‘-spiration’ – Thinspiration, Bonespiration, Fitspiration – are not meant to be positive. These messages are negative by their very nature – and if they are not negative, then they do not fall into the category. If people really wanted to send out health-positive, body-positive messages related to fitness, why would they share the ‘branding’ of Thinspo and Bonespo and the likes?

Turning Fitspiration images into positive rather than negative messages simply stops them from being considered Fitspiration at all.

As social media has become such a pervasive form among the younger generations over the past few years, do you think the utilization of these channels is particularly detrimental as susceptible young people are bombarded with these images through constant news feed updates and other such actions? Baring in mind that the subscribers to these pages are largely in the 18-24 age bracket and that some are specifically targeted towards teenagers.

Social Media gets a bad rap. But I view it just as I view any other communication medium: it can be used for evil, and it can be used for good. So, yes, social media does make Fitspiration far more accessible (or, it could be argued, accessible at all) to younger (as well as older) audiences; however, it is through social media that positive messages can be accessed, too. And we can’t forget that.

Body Positive websites/Facebook Pages/Twitter accounts/Pinterest boards – there are just as many of them, I would say, as there are harmful ones. And let’s not forget all of the blogs and support forums. So, yes, social media does make the distribution of harmful messages like Fitspiration easier, but if it wasn’t for social media, the good messages would also not be put out there.

What do you say to people who defend Fitspiration by separating it from Thinspiration, explaining that it’s about performance – “measuring yourself in miles not inches” – but then it is riddled with tips on how to get a “thigh gap” or “lose cellulite” or “tone your toosh”?

In their defence, however, they don’t realize what they are saying is harmful because it is their addiction, too. We must remember that. The people who create these messages (and also those who spread them) are not doing so because they want to ‘trick’ us all and watch us harm ourselves, they do it because they believe it, too.

While thinspiration is largely viewed as unquestionably harmful as it promotes controlled/reduced eating (which is obviously harmful), whereas fitspiration is hinged on the idea of “healthy eating and exercise” (which we are told are ingredients for good wellbeing) and therefore seems more acceptable, could you say that fitspo is more destructive as it seems acceptable and may be embraced by more people?

First of all, I wouldn’t say that Fitspiration is based on ‘healthy eating’. The term ‘Healthy eating’, just like weight and size etc.., is not about content. It’s not about what you eat or how many calories or how much protein etc… it’s about how and why you eat. In the same way that healthy exercise isn’t about calories burned or time spent, it’s about how and why you exercise.

People seem to forget this – or maybe they don’t realize it. And so I have not seen any Fitspiration messages that support healthy eating in its truest sense.

Like I mentioned in the beginning, our body’s only goal – the only thing that is innate to it – is self-preservation, and this goes for our eating habits as well. And so true ‘healthy’ eating (physically, mentally and emotionally healthy) can be found only by the principles of Intuitive Eating: Eat when you are hungry, eat what your body craves, stop when you are full. It’s that simple. Anything else leads to deprivation, restriction, and guilt.

No Fitspiration message says that.

However, I do agree that because Fitspiration seems to adopt the ‘healthy eating’ laws we’ve been told by the multi-billion dollar diet industry and that we ourselves have adopted as well, yes, it does appeal to a wider audience. And I think it is because of this that Fitspiration is so harmful – because it masquerades as having ‘good intentions’; Fitspiration’s greatest weapon is its subtlety.

The democratizing effects of the internet enable a counter-balancing effect, allowing voices like yours to be heard through social media channels – what actions have you taken to spread the message of #stopfitspiration – which avenues have you used?

One of the main ways we spread #StopFitspiration is by taking the most harmful Fitspiration images and counteracting them by placing more positive counter-arguments, if you will, on top using PhotoShop.

The Dangers of Fitspiration: An Interview

Tagsexercise addiction fitness fitspiration
FacebookTwitterPinterestLinkedInRedditEmail
SITE DISCLAIMER: The opinions and information shared in this article or any other Content on our site may not represent that of Libero Network Society. We hold no liability for any harm that may incur from reading content on our site. Please always consult your own medical professionals before making any changes to your medication, activities, or recovery process. Libero does not provide emergency support. If you are in crisis, please call 1-800-784-2433 or another helpline or 911.

4 Min Read
Exercise Addiction: The Why and How
What is Muscle Dysmorphia