I will forever be grateful that five years ago I was unsuccessful in taking my life. Like most people, life has its challenges, but I am able to manage them healthily and remain well.

“Freedom for me means being able to be at peace with myself and live with joy. After many years being controlled through abuse and then feeling controlled by medication, I have come to learn how to regain a gentle control of my own life and wellbeing and from this, I have come to flourish.”

(what does freedom mean to you?)

This time five years ago I was rebuilding my life after a suicide attempt. I had spent a week in a coma and by a miracle made it through without brain or organ damage.

What led me to try and take my life that January afternoon was complicated; however surviving my suicide attempt led me to a remarkable place where I became the driving force in my own wellbeing.

Surviving my suicide attempt led me to a remarkable place where I became the driving force in my own wellbeing.

In the years leading up to my suicide attempt, I was diagnosed with Complex PTSD, which was the result of violent childhood sexual abuse.

In my twenties, the enormity of my past led to a breakdown with the subsequent years being a carousel of hospital admissions for active suicidal thoughts and admissions for anorexia and bulimia.

I became dependant on self-harm as a coping strategy. I barely slept and I became a hollow version of myself. 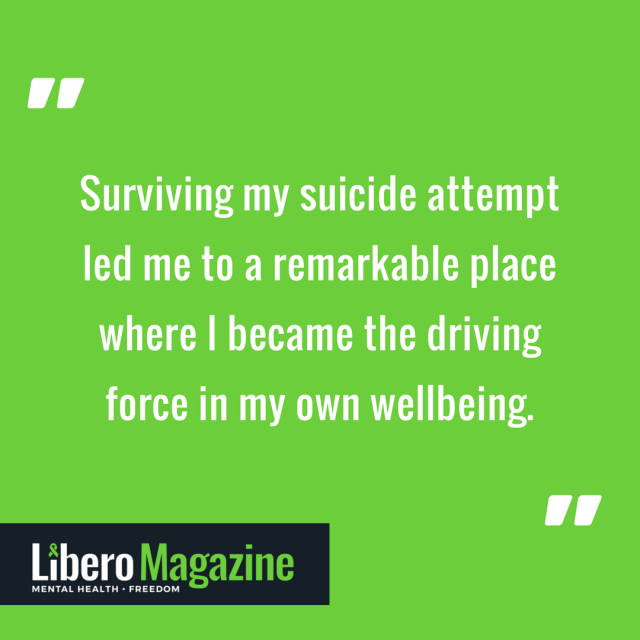 I struggled with crippling anxiety, depression, insomnia, and dissociative episodes. To combat this I was prescribed a veritable cocktail of mental health drugs. By the time of my suicide attempt I had been in therapy for many years and yet for every step, I went forward (and I truly did move forward) I could never fully step away for the nightmare that left me feeling out of control.

I struggled with crippling anxiety, depression, insomnia, and dissociative episodes.

I couldn’t see an end to the terror and in the end, the terror overtook me as I tried to end the pain permanently.

When I awoke from the coma something unimaginable had taken place. Somehow the weight of my despair lifted enough for me to glimpse hope in my future. I wasn’t instantly cured, but something within me had changed and I was able to shake off the passive acceptance of my fate and start fighting for my health.

Somehow the weight of my despair lifted enough for me to glimpse hope in my future.

Whilst I was in the hospital I was asked what I wanted for my future. Without missing a beat I replied, “I want to be well, I just want to be free to live my life and enjoy my family.” My psychiatrist replied, “I see no reason why you cannot be well. You have the power to be free and I believe in you.”

Her belief in me was deeply empowering. For so many years I had lost all hope that I would ever be well.

For so many years I had lost all hope that I would ever be well.

In fact, I had been told by some health professionals that perhaps this was as well as I was going to get, that living with suicidal thoughts, depression, and anxiety was to be my life. I was so exhausted by the illness and the nature of my PTSD that I became resigned, even if that resignation brought me to such feelings of despair.

It was clear during my admission that the eight different medications had led to little improvement in my wellbeing. It was suggested that I reduce my medication to just three. Reducing my medications coupled with the belief my psychiatrist had in my recovery became pivotal.

Reducing my medications coupled with the belief my psychiatrist had in my recovery became pivotal. 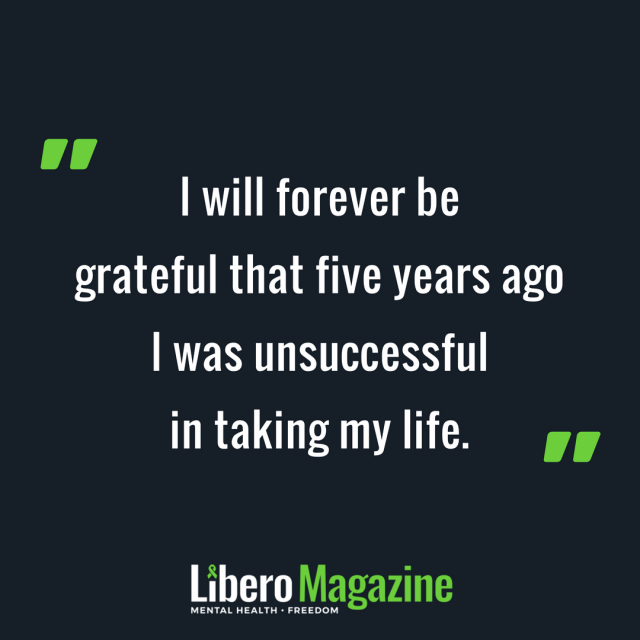 After I returned home, not only did I need to work on recovery but also I had to regain the trust of my family and friends. They had been through the ordeal of nearly losing me and they, too, were weary from living with someone who was profoundly unwell for so many years.

Understandably, to begin with, there was much skepticism in my recovery. Yet as they observed the gentle determination in me, they became my greatest supporters.

As my family observed the gentle determination in me, they became my greatest supporters.

I soon came to realize that to recover and stay well I needed to change how I managed the terror of my PTSD. I had to stop controlling it with unhealthy behaviours or numbing medication. Instead, I needed a long-term strategy to manage my emotions, flashbacks, and feelings.

In the early stages of self-management, structure became important. To begin with, I had a rigid routine and it was mind-numbingly simple.

In the early stages of self-management, structure became important.

As I progressed, I realized I needed to find ways of managing the anxiety. With the help of my brother, I bought my first running shoes and started to walk and then to run. It helped me gain strength and stamina to manage what each day brought.

Ultimately, when I moved my body I could face some of the terrible things in my past because it stopped the thoughts from getting stuck and allowed them to move on.

I bought my first running shoes and started to walk and then to run. It helped me gain strength and stamina to manage what each day brought.

As the months passed, I continued to improve. I made the decision, with my family’s support, to reduce my medication. However, this was to be somewhat harder than I had anticipated. Many mental health drugs are very challenging to withdraw from. During the coma, I had “withdrawn” from a number of the more addictive medications cold turkey and they were not reintroduced afterwards.

I made the decision, with my family’s support, to reduce my medication.

When I decided to withdraw from the further medication I was unprepared. That first day I thought I was dying; I was sick and shaking. To my bitter disappointment, I had no choice but to resume the medication. I had a very supportive pharmacist and I told her my experience. She believed the key was to make very small reductions bi-weekly.

My pharmacist believed the key was to make very small reductions bi-weekly.

The first week of the reduction I would have minor flu-like symptoms. I also experienced what felt like minor electric shocks in my brain, but within a few days, they subsided. This method allowed my mental health to remain stable, which was key. Big reductions could have been harmful. It took me fifteen months to finally be free of all the medication.

I can clearly remember the day I took my last dose: it was March 1st, 2014. It was also the day I ran my first 10km race. As I ran my race, I relished my new freedom. I had reclaimed my body and mind.

As I ran my race, I relished my new freedom. I had reclaimed my body and mind.

Nothing about the journey was easy. On many occasions, I wanted to give up. Yet somehow I found the strength deep within me. And when I was faltering I relied upon the strength of my faith, my family, and my friends.

Somehow I found the strength deep within me.

Life five years on is good. We returned to live in the UK after eight years in Canada. I lead a busy life; working, being a mom, running, and I’m active in my church life. I will forever be grateful that five years ago I was unsuccessful in taking my life. My mental health is remarkable. Like most people, life has its challenges, but I am able to manage them healthily and remain well.

I will forever be grateful that five years ago I was unsuccessful in taking my life. Like most people, life has its challenges, but I am able to manage them healthily and remain well. 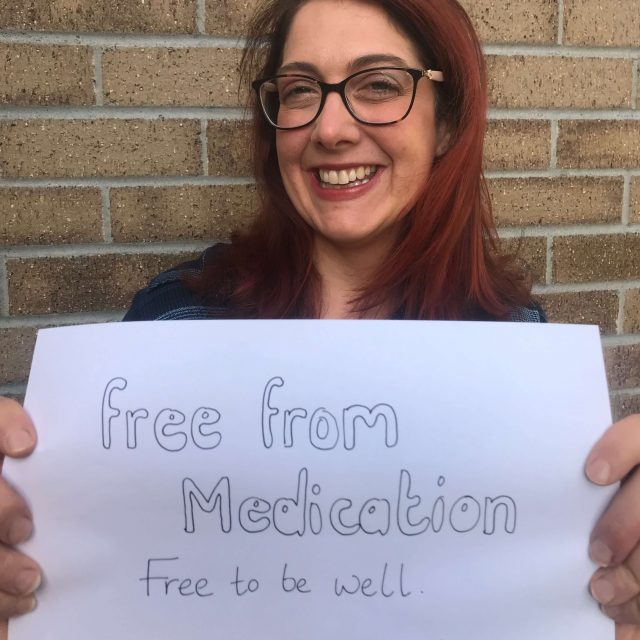 I want to add a note about medication: In telling my story, I am in no way saying that mental health drugs are bad or dangerous. But I wanted to share that in my experience, medication did little to help me and perhaps it exacerbated my situation. I also feel that the nature of my PTSD had led me to feel deeply disempowered throughout my life and that the medication enhanced this feeling. I think we all have a lot to learn in treating the mental health of those who have been sexually abused.

Ruth: Free from Medication; Free to be Well

Ruth is a mom of two amazing kids, two gorgeous doggies, and two crazy cats. She has returned to live in the UK with her husband after eight years in Canada. Ruth is a musician and teacher. When she’s not doing that she is pretty busy with her church life and likes to think she’s a bit sporty. Throughout the years of living with the profound symptoms and fall out of PTSD Ruth blogged about her journey. Over the last four years she decided to take a break from blogging; however, her pen is poised to share more about her life beyond, staying well, and other musings.

Tagsmedication mental health overcoming abuse stories
FacebookTwitterPinterestLinkedInRedditEmail
SITE DISCLAIMER: The opinions and information shared in this article or any other Content on our site may not represent that of Libero Network Society. We hold no liability for any harm that may incur from reading content on our site. Please always consult your own medical professionals before making any changes to your medication, activities, or recovery process. Libero does not provide emergency support. If you are in crisis, please call 1-800-784-2433 or another helpline or 911.