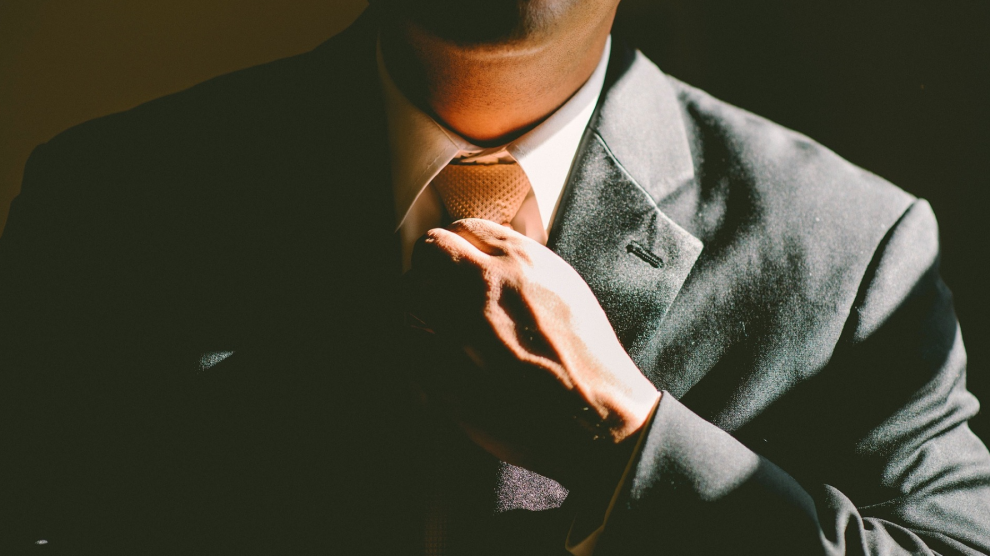 50 Shades of Grey showcases many aspects of unhealthy and abusive relationships. Here are 10 Signs of Unhealthy Relationships we Should Pay Attention to.

Last week I went to see 50 Shades of Grey with the purpose of writing about it. For those who don’t know, 50 Shades is a movie based on a 3-part novel series based on a Twilight fanfic (and you all know how I feel about Twilight…) At Libero, we talk mostly about mental health, and it is important to remember that relational health is closely linked to this. There are many topics in this story that should be discussed: sexuality, rape culture, pornography… However, I have limited words and must stick with a focused theme. I decided discussing the relational health (or lack thereof) in this movie was best. 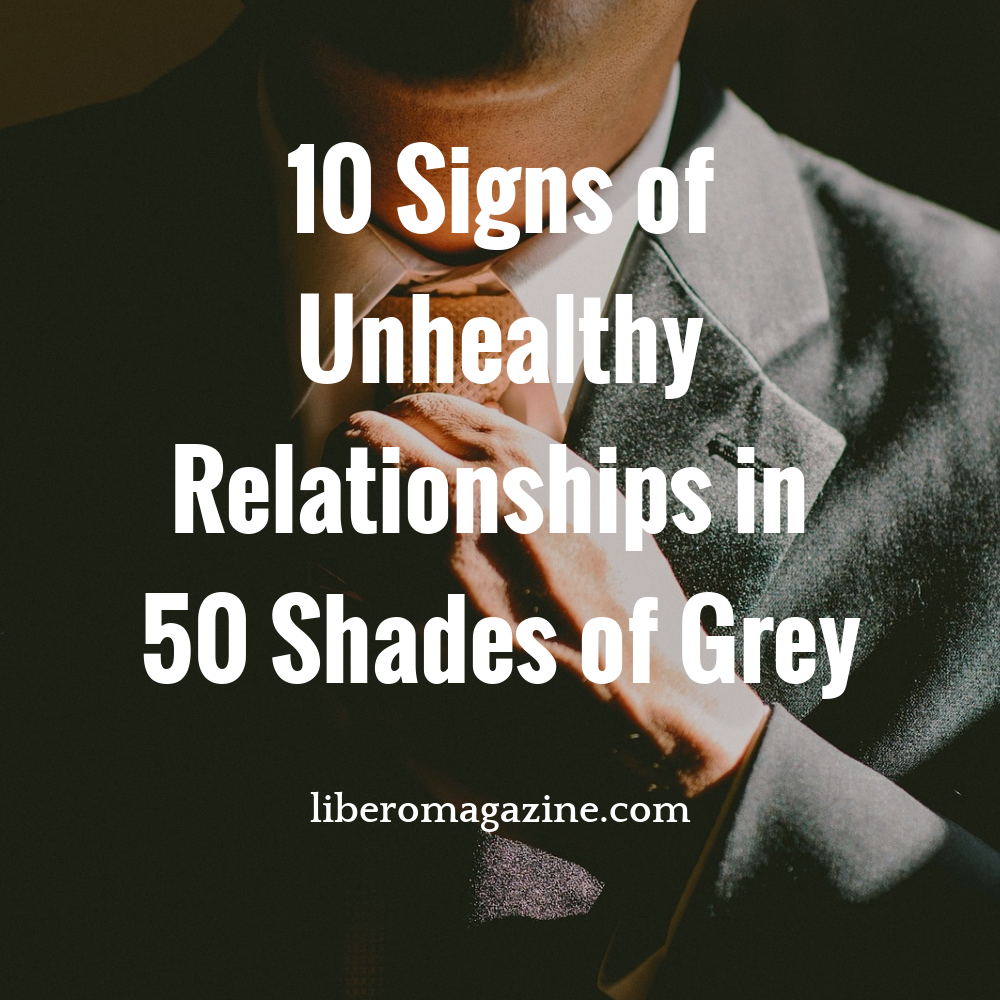 Isolation is one of the first red flags in an unhealthy or abusive relationship. According to Patricia Evans, author of “The Verbally Abusive Relationship,” verbal abuse most commonly takes place behind closed doors.

One of the best examples of this from the film is found in Christian’s “non-disclosure” agreement; this is where he tells Anastasia she is not allowed to discuss their relationship with any outsiders, including friends and family.

In addition, we rarely see the couple “out and about” around people. Though there is the odd dinner or roommate encounter, for the most part, they keep to themselves and they certainly keep their relationship to themselves.

Lie: You need to keep your relationship between you and your partner. It is nobody else’s business or concern what is said or done to you.

This film is littered with situations where Christian is enforcing control over Anastasia. The film mostly glamourizes this, painting it at best as part of his personality, and at worst as a sign of affection.

We see this in everything from him calling her when she’s at the bar with her friends and demanding she go home immediately (and then picking her up himself and taking her) to the “contract” he wants her to sign, which dictates not only how their sexual relationship will work, but also what type of birth control she must use, and even how she must eat.

Lie: Within a relationship, one person is meant to have control, and can dictate where you go, who you spend time with, and what you do.

Truth: Relationships are about equality and mutual respect. This includes the freedom to speak up and voice your feelings and concerns.

Christian also intimidates in more discreet ways. For example, when he attempts to feel up her leg at the restaurant and she pushes his hand away, he glares at her, as if to say “you will pay for this.” Then he takes her outside and lectures her. He also uses passive-aggressive tactics to punish her when he’s displeased.

Lastly, his consistent use of pulling her by the arm and picking her up and carrying her when she doesn’t want to go with him is a way to showcase dominance and remind her who has power in the relationship.

Lie: If you speak up, disagree, or express your feelings, you are at risk of upsetting your partner and being punished in some way.

Truth: Intimidation is not love. You should not fear your partner, nor feel the need to submit to his control to avoid punishment.

“You’re mine, all mine, understand?” This is Christian’s response when he finds out Anastasia is planning to visit her mom in Georgia but didn’t tell him. He expresses jealousy when she speaks with other men, and, as already discussed, is highly controlling. He views Anastasia as property, constantly referring to her being “his” and saying things like “if you were mine…”

Possessiveness is another form of control. Christian tries to hold onto Anastasia and keep her all to himself as a way of controlling her and keeping her under his power.

Lie: It is flattering when someone demands you belong to him/her and doesn’t want you to spend time with anyone else or go anywhere without him/her.

Truth: True love offers freedom. You do not belong to anybody and you have the right to stay or to leave. And jealousy is not a sign of affection; it is a sign of possessiveness.

In her book “The Manipulative Man,” Dorothy McCoy defines various forms of abusive personalities. Based on her definitions, Christian Grey is a Narcissist.

“If you are in a relationship with [a narcissist],” she says, “you will be of little importance in his life other than providing his supply of attention.” “Narcissists can be brilliant at accruing capital and building empires” (as seen in Christian’s financial success) “and yet have tense disconnected personal relationships. Because Narcissists lack empathy, they can only conceive of intimacy as an abstract concept.” She adds, “Narcissists live within the confines of their egocentric world; other humans function as props for the Narcissist’s performance.”

So much of this is seen in Christian Grey in terms of his arrogance, avoidance of intimacy (note: Anastasia isn’t allowed to touch him), and approach to sexuality. In one instance when Anastasia tries getting him to open up and talk to her, he shuts down and responds, “Meet me in the playroom in 15 minutes.”

Lie: If your partner doesn’t want to be intimate, you should accept that; some people are just closed-off.

Truth: True love involves intimacy. Sure, some people are more “touchy-feely” than others, but for a relationship to be healthy, a couple needs to share their feelings and be open to connect on a deeper emotional level.

Mutuality is lacking throughout the entire film. This shows itself in the relationship both emotionally (where Anastasia opens herself up to intimacy, but Christian does not reciprocate) and physically (their sexual relationship is all about Christian’s needs and desires).

Christian even rejects Anastasia’s wish to go on dates and sleep in the same room (she sleeps upstairs in her own room while his room is downstairs).

As a “compromise,” Christian agrees to one date a week and one night a week sleeping in the same bed. However, these are both intimate parts of a relationship, and given that Anastasia values intimacy and Christian is offering it simply as an obligation, this is still not a sign of a truly mutual relationship.

Lie: Your partner doesn’t have to care about your values and needs; if they “comply” by giving in occasionally, you should consider yourself lucky.

Truth: You deserve to be appreciated and to be with someone who fulfills your needs and has similar values. A one-sided relationship is not loving.

The line between consent and coercion is so blurred in this film it cannot be ignored. Christian shows no respect for consent and even becomes angry if Anastasia rejects his requests or advances. In addition, he is constantly coercing her into doing things she initially is uncomfortable doing by asking repeatedly, convincing and even getting upset with her.

Lie: Whatever your partner wants or requests, he/she deserves, even if it makes you uncomfortable.

Truth: You have the right to say no. And no means no.

This seems obvious, but I think sometimes we make the mistake of viewing a stalker too narrowly: someone crouching in the bushes, dressed in black, peering through your bedroom window. According to the Canadian Department of Justice, however, stalking is any “repeated conduct that is carried out over a period of time that causes victims to reasonably fear for their safety.” One example is “repeatedly following or communicating with another person.” (source)

We see this when Christian shows up unannounced over and over again (including when Anastasia has been upset and left him). He shows up at her workplace, her apartment, her mom’s house in Georgia, and also repeatedly calls her when she won’t respond.

Lie: It is flattering for someone to want to be with you so badly that he/she can’t let you go or leave you alone.

Truth: Unwanted or unsolicited attention, especially in the form of incessant phone calls or unannounced/unwanted visits, is not a sign of affection, and may even be a criminal offence.

And yet she stays.

Lie: Your instincts can’t be trusted and are likely overreactions—you should ignore them and pursue a relationship, even if it feels wrong.

Truth: Trust your inner voice. If someone makes you feel uncomfortable, don’t stay. If you have a bad feeling about how someone is behaving or how they make you feel, or what they are trying to get you to do, listen to your instincts and, at the very least, take them into serious consideration.

10. the “He Will Change” Mentality

This is dangerous. The mentality that “he will change” or “it will get better, just be patient” or, worse, “I can change him” has been so abused and reinforced by countless movies and TV plots that it makes me want to scream.

However, we are not talking about minor personality differences here.

When it comes to all of the things discussed above, as well as the initial instincts Anastasia had about Christian, the “He Will Change” mentality is dangerous and could even be deadly.

Someone once told me I have the gift of seeing people for who they should be, but that I should be cautious to never mistake that for who they are. When making important decisions, such as who you will enter into a relationship with, it is important you base that decision on who the person is today—not who they may become tomorrow.

Lie: If you try hard enough, be patient, love enough, the person you are with will eventually come around and treat you the way you deserve to be treated.

Truth: Look at who someone is today. It is not your job to heal or fix someone, and if you attempt to do this within the context of a relationship, you are asking for trouble.

10 Signs of Unhealthy Relationships in 50 Shades of Grey

Tagsmedia + pop culture overcoming abuse relational health verbal abuse
FacebookTwitterPinterestLinkedInRedditEmail
SITE DISCLAIMER: The opinions and information shared in this article or any other Content on our site may not represent that of Libero Network Society. We hold no liability for any harm that may incur from reading content on our site. Please always consult your own medical professionals before making any changes to your medication, activities, or recovery process. Libero does not provide emergency support. If you are in crisis, please call 1-800-784-2433 or another helpline or 911.