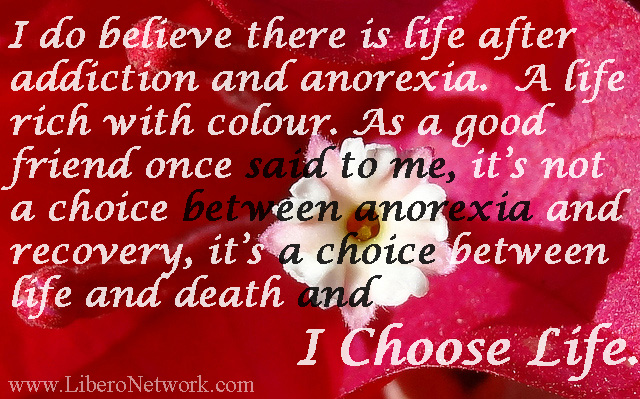 I grew up in a small town, the youngest of four.  As a child I was quiet and a good student but things started to go wrong for me as I reached my teenage years.  I wasn’t happy at home, my father was a drinker and there was a very tense atmosphere in the house so I started to spend as little time as possible there.

I started at a new secondary school where I made new friends.  I had very little confidence in myself and was desperate to be accepted and liked by my new ‘cool’ friends.  I dropped out of competitive swimming and gave up my beloved ballet.  I took up smoking then drinking then began to dabble in drugs age 15.  I used sporadically for the next few years but it wasn’t until I tried heroin at age 18 that my drug use became unmanageable.  I was instantly hooked and soon I was living in the murky underworld that is drug addiction.  I went from being a girl with a dream to a girl living in a nightmare.  I dreaded waking up each morning knowing what lay ahead of me for the day.  I became an expert liar, a proficient thief and did unspeakable things for money for drugs.  It was a race to keep the sickness at bay and I was always playing catch up.  The next few years I was on the never-ending merry-go-round that is an addiction.  Drugs, methadone, treatment.  Lather, rinse, repeat.

All the while I was addicted to drugs and alcohol, my eating disorder was silently developing.  For the first few years, I had no idea I had anorexia.  It wasn’t until I was in the hospital doing a drug detox that a nurse sat me down and told me that I had anorexia.  I refused to believe her even though my behaviour backed up what she claimed.  I spent the rest of my hospital stay trying to prove I didn’t have an eating disorder, trying to fool them by hiding food and flushing it down the toilet.  In reality, I was dangerously underweight and very sick.  After that hospital stay, I was supposed to go on to drug treatment but they refused to accept me because I wasn’t physically strong enough.  This was the first of many instances where I found myself either too sick or not sick enough to qualify for treatment.

For the next few years, I chopped and changed addictions, from food to drugs to alcohol.  I was still in denial that I had an eating disorder.  It’s a strange truth that I spent more time worrying that I didn’t have an eating disorder than I did worrying about if I had one.

A lot of people with anorexia go on to develop bulimia and I was one of them.  Unlike anorexia which is plain to see, bulimia is invisible so no one would ever know you were suffering from it unless you told them.  I would starve for days until I finally broke and proceeded to binge and purge.  At my worst, I was binging and purging up to 20 times a day and had a path worn from my kitchen to my bathroom.

I pushed all my friends away and my world shrunk to just me and my eating disorder.  I had a passive death wish.  Willing death upon myself but not actively seeking it.  I began to shoplift food and developed strange rituals around food.  One of these was weighing myself.  I weighed obsessively, in the morning, in the evening, after I went to the bathroom, and after I purged.  Those little numbers had so much power over me. If the number was up then I would spiral into a black hole of depression, if the number was down then I would skyrocket into euphoria.  Those numbers dictated my mood, my self-esteem and my self-worth.

Today I am clean of drugs and alcohol for three years but my eating disorder is still very active.  My body has started to recover but my mind is still far behind and still so very sick.  Recovery sometimes feels so elusive and I know I have to want it.  I want to want recovery if that makes sense.  I think because I have regained some weight people presume that I am better, but I am just as sick at my current weight as I was at my lowest weight.

Sometimes it feels as though I am in limbo, somewhere between my eating disorder and recovery.  I have been in treatment 4 times and relapsed every time but I have not given up hope.  I’m currently engaging in therapy and I am trying to fight this cruel illness.  I’ve lost over a decade to addiction in one form or another and I don’t intend on losing another one.  The thought of recovery is both terrifying and thrilling.  Terrifying in that I don’t know what would be left if my eating disorder was taken away.  A big eating disordered shaped hole?  I guess what would be left is me and me is exactly what I’ve been running from all these years.  But it is also thrilling thinking of the life I could lead.  There is a whole world for me to explore, friends to make, places to see and dare I say it, food to eat.

Today is a good day and I’m feeling positive about the future.  I often think of my eating disorder as an abuser.  Like an abuser, it grooms me and lures me in with false promises of happiness.  Once I am seduced it shows its true colours and how evil it truly is.  Now I know these promises are lies and I am getting stronger every day and more able to resist.  I’m making small but positive changes.  Putting my scale away, engaging in therapy, putting one foot in front of the other and keeping going.

I do believe there is life after addiction and anorexia. A life rich in colour. As a good friend once said to me, it’s not a choice between anorexia and recovery, it’s a choice between life and death and I choose life.

Ruby: Free from Addiction and Anorexia

Tagsaddiction eating disorders stories
FacebookTwitterPinterestLinkedInRedditEmail
SITE DISCLAIMER: The opinions and information shared in this article or any other Content on our site may not represent that of Libero Network Society. We hold no liability for any harm that may incur from reading content on our site. Please always consult your own medical professionals before making any changes to your medication, activities, or recovery process. Libero does not provide emergency support. If you are in crisis, please call 1-800-784-2433 or another helpline or 911.