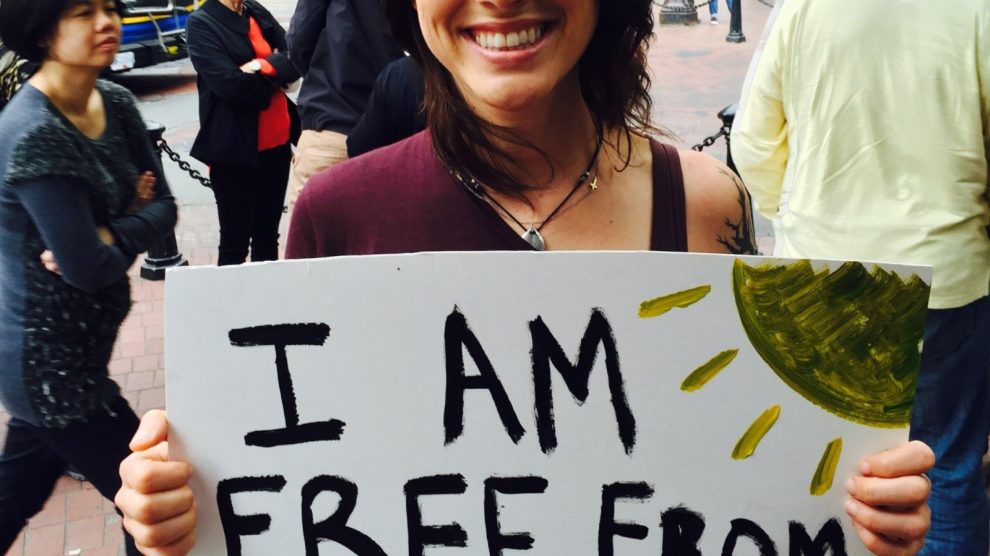 Although I may not be able to wake up tomorrow and be completely free from my eating disorder, I am proud to say I choose to be free from stigma and shame about it today.
Before you start reading...

My name is Carissa and I am free from Stigma!

I don’t remember the day food became more important than my family or when the focus on my weight began to outweigh my friendships. I never chose to stop doing the things I loved—writing, listening to music, reading, and enjoying the sunset. Nor did I sign up to lose my ability to focus on conversations, to dissociate during meals, or to withdraw from the world around me.

And I certainly would never have chosen to spend so much of my life wandering around grocery stores in a haze stealing the superfoods that took the place of my values.

Speaking for myself and the estimated other 30 million people living with eating disorders, there is nothing glamorous about it.

May was Mental Health Awareness Month—this year’s theme was about reducing the stigma surrounding those who suffer from mental illnesses. Stigma is a negative judgement perceived about a person or group as a consequence of inaccurate information. In the 2008 NEDIC study “Stigmatization of Eating Disorders” published by Gina Dimitropoulos, she shares data that eating disorders are more trivialized and shown less empathy than other severe mental illnesses such as schizophrenia because they are mistakenly seen as “self-induced.” In addition to this common misconception, we live in a culture that encourages behaviors such as restricting, fasting, and over-exercising.

I cannot imagine a world in which someone would voluntarily choose to be so preoccupied with food, exercise, and their body that they are no longer able to be present with the ones they love. In my case, it took moving four times, quitting three jobs, selling my car, fleeing the country, and having more than half of my hair fall out before I knew something was really wrong. I was running from bizarre urges to binge, purge, and steal (kleptomania is often associated with bulimia nervosa). I didn’t know why I was out of control until I finally found the “solution” to my struggle—health foods and exercise! I could hide my internal civil war with food and weight in a culturally acceptable package of health and fitness.

Unfortunately, you can’t solve a problem with the same thinking that started it.

My isolation and self-destructive behaviors worsened as my weight rapidly dropped. My brain was barely functioning when I finally took a friend’s encouragement to go see a doctor. I only agreed because my hair was falling out, which I thought was due to birth control side effects. I began to cry when the doctor said, “You seem to have a serious mental illness called orthorexia, and you need help immediately.” Although I had never heard of orthorexia (directly translates to “fixation on righteous eating”), I cried. Someone finally put a name to the unbearable pain I was experiencing.

In reality, I was extremely close to losing my life to an illness I didn’t even know I was fighting.

When I returned home, my family immediately checked me into an eating disorder treatment center. I remember being blown away by the schedule. Seven days a week? Come on, there’s no way this can be that bad. Blood tests showed it was and that I wouldn’t have lasted much longer at the pace I was going. The sad part is even though I had spent almost two years struggling with bulimia before the office visit, my weight didn’t reflect the help I so desperately needed. 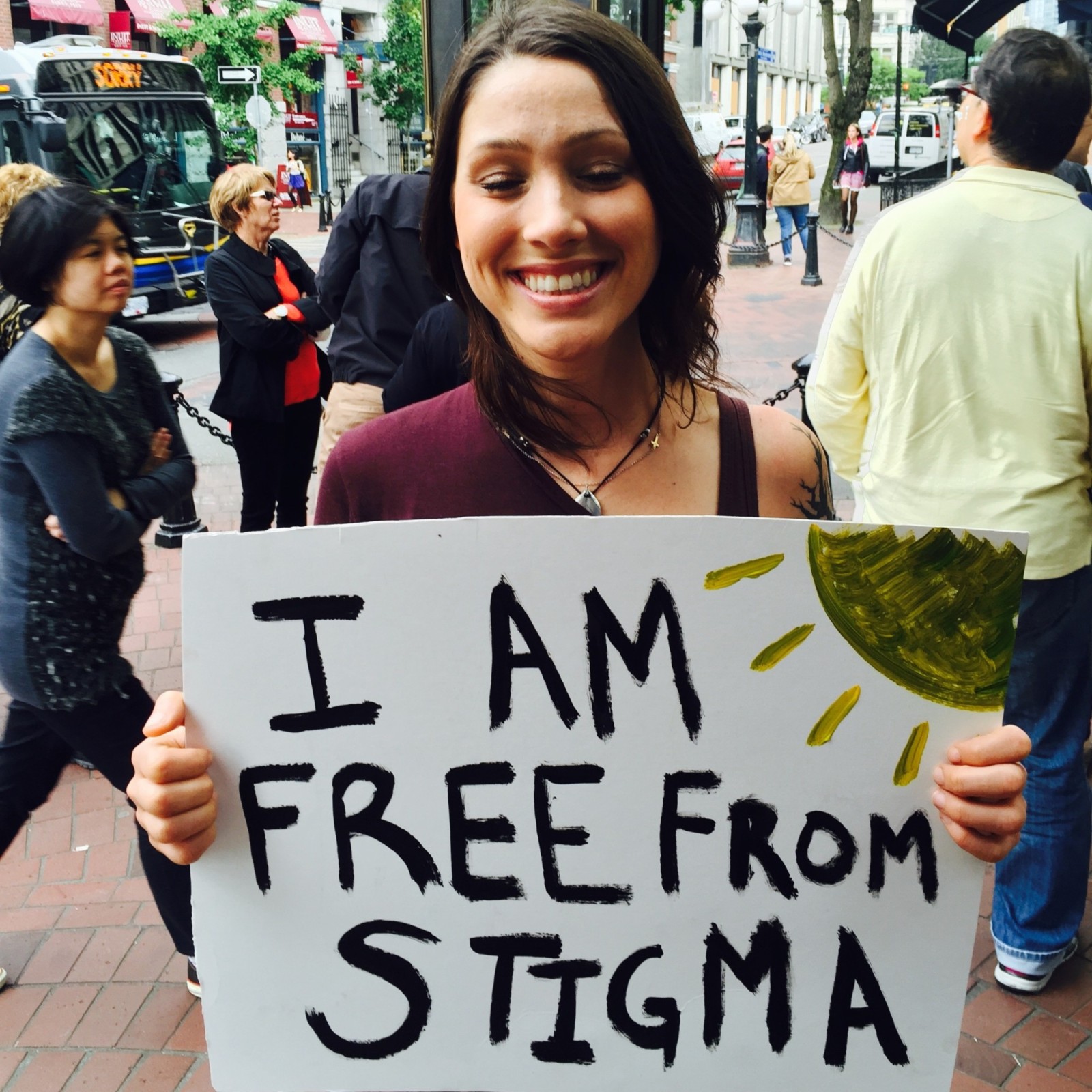 I’ve experienced firsthand the misconception, judgment, and shame surrounding having an eating disorder—especially when it comes to weight. Throughout my struggles with anorexia, bulimia, and orthorexia my weight has fluctuated +/- 40 lbs. I have suffered just as much (if not more) at my highest weight than at my lowest weight. The first thing people look at when I tell them I am in treatment for an eating disorder is my body. “You don’t look like you have an eating disorder.” I’ve actually had a doctor tell me I “look great” and that purging is just something I’ll grow out of. The wonderful humans I have met while in treatment come in all shapes and sizes, yet time and time again friends, family members, insurance companies, and even health professionals determine how well we are doing based on what the scale says.

Eating disorders have the highest mortality rate of any mental illness.

They are silently suffocating millions of brilliant and compassionate people as we speak. I believe if we broaden our idea of what eating disorders “look like” then more people would reach out for help.I can’t tell you how many friends I have who are still trapped in a prison of compulsive eating, exercise, and negative body image yet claim to be “too fat to need help.”

I don’t expect the media’s portrayal of eating disorders to shift overnight from glorifying emaciated supermodels to representing a broad spectrum of genders and bodies, but I do hope as we evolve toward a more self-aware society we will begin to question the stigmas and stereotypes we hold by trying to see each person for who they are.

A woman at my center said,”I never chose to have an eating disorder, but I did choose recovery.”

I love that concept. Let go of the things we can’t change and change the things we can. I plan to do my part in working hard daily towards recovery and remaining open about my struggles even while being weight restored.

Although I may not be able to wake up tomorrow and be completely free from my eating disorder, I am proud to say I choose to be free from stigma and shame about it today.

“I choose to be free from stigma and shame 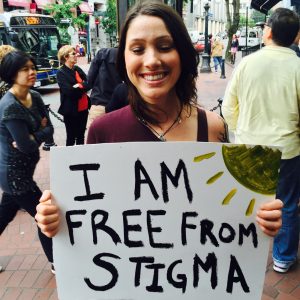 Carissa Shaul believes in miracles. Since finding her way to freedom after a five-year battle with an eating disorder, Carissa founded Abandon Perfection which offers coaching to women on a similar path. In addition to writing, Carissa fulfills the call of her soul through teaching yoga at an eating disorder recovery center, studying psychology, traveling, and hanging out with her sweet Boston Terrier in the rainy forests of the Pacific Northwest. 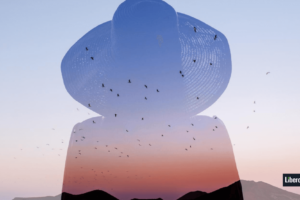 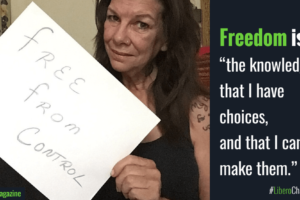