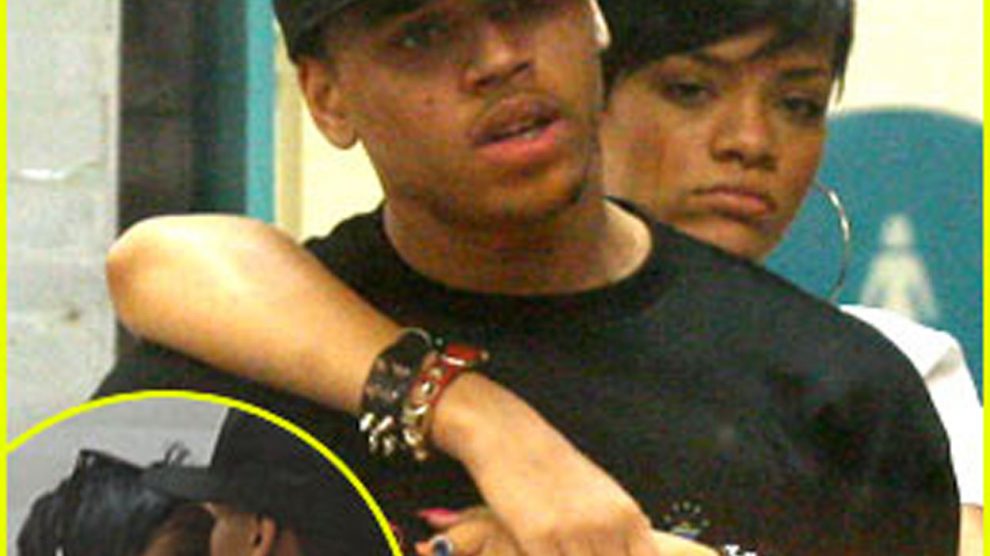 Part 2: Beyond Vampires and Werewolves

On August 5, 2010 both Eminem and Rihanna fans alike tuned into MTV to watch the premiere of the “Love the Way You Lie” music video. The video begins with Rihanna’s singing in A Capella:

Rihanna is then followed by a violent-sounding Eminem (what’s new) spewing off:

“It’s so insane cause when it’s going good, it’s going great / I’m Superman with the wind at his back, she’s Lois Lane / But when it’s bad it’s awful, I feel so ashamed I snapped / Who’s that dude? I don’t even know his name / I laid hands on her, I’ll never stoop so low again / I guess I don’t know my own strength…”

But surprisingly it is not what we hear in the first two minutes of the video that is most surprising, but what we see. The scene begins with a couple in bed; the young woman wakes up to find the phone number and name of another woman written on her boyfriend’s hand. This turns into a fight, which involves both parties violently grabbing and shoving each other as they storm around the house. At one point the man has the woman pinned to the wall and throws a punch, strategically hitting the wall – right next to her head. Then both parties stop and transition into passionately kissing one another.

Yes, that is what really happens.

The lyrics of the song continue down the same path as with the beginning of the song, with Eminem spewing off violent words (“You push, pull each other’s hair, scratch, claw, hit ’em / Throw ’em down, pin ’em / So lost in the moments when you’re in them”) partnered with his plans to ‘change’ (“Next time I’m pissed, I’ll aim my fist at the drywall”) and ending with a threat (“If she ever tries to f*cking leave again Im’a tie her to the bed and set this house on fire”), and Rihanna responding with how much she “loves the way he lies”. 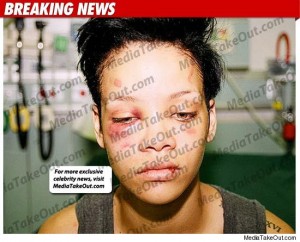 Rewind only a year and a half earlier and we see this picture released by TMZ of a battered Rihanna with bruises and cuts all over her face after a violent assault from her then-boyfriend, fellow R&B star Chris Brown.

The assault began as an altercation between the couple while driving to a pre-party on the night of the 2009 Grammy awards. Rihanna found text messages on Brown’s phone from another girl, and this caused an argument between the two of them. The argument quickly became violent. According to the Police Report, this is what happened next:

“Brown pulled the vehicle over on an unknown street, reached over Robyn F. [Rihanna] with his right hand, opened the car door and attempted to force her out…. When he could not force her to exit, he took his right hand and shoved her head against the passenger window of the vehicle, causing an approximate one-inch raised circular contusion… [Brown] continued to punch her in the face with his right hand while steering the vehicle with his left hand. The assault caused Robyn F.’s mouth to fill with blood and blood to splatter all over her clothing and the interior of the vehicle….[Rihanna] reached up with her left hand and began attempting to gouge his eyes in an attempt to free herself. Brown bit her left ring and middle fingers and then released her…”

The assault continued until Rihanna managed to push Chris Brown off of her and began screaming, at which point Brown left the vehicle. A resident of the area heard Rihanna’s screams and called 911, and the police arrived on the scene.

Fast-forward and we see a poised, yet clearly shaken, Rihanna speaking on ABC’s 20/20 about her relationship with Brown and the assault that took place: “He was definitely my first big love. We were best friends, so we fell in love with each other. To fall in love with your best friend it’s – it can be scary….the more in love we became, the more dangerous we became for each other…because it was a bit of an obsession” – sound familiar? (Only this time, there is no ‘but he’s a vampire’ defense).

Rihanna knew that her celebrity put her in a position of influence over millions of girls, and this is why she chose not to return to Brown again; she says, “When I realized that my selfish decision for love could result in some young girl getting killed, I could not be easy with that part. I couldn’t be held responsible for going back. Even if Chris never hit me again, who is to say that their boyfriend won’t? Who’s to say that they won’t kill these girls? And these are young girls and I just didn’t realize how much of an impact I had on these girls’ lives until that happened“.

You can’t help but respect Rihanna for that.

Brown, however, didn’t do such a good job at representing himself after the assault. Offering a nice addition to his resume was his violent outburst in the ABC studio in March 2011. Following an interview on Good Morning America, in which his not-so-glamorous past with Rihanna was brought up, Brown was said to have lost control in his dressing room, throwing a chair at the window and shattering it. He then took off (or ‘ripped off’ as more dramatic reports describe) his shirt and left the studio – storming through the streets of New York angry and shirtless. Clearly, he must be on ‘Team Jacob’, and not ‘Team Edward’), because storming through the streets in a bitter rage with no shirt on is, after all, a werewolf’s specialty.

Fast-forward again to the 2012 Grammy Awards (three years after the Brown/Rihanna assault) and Chris Brown has emerged from the shadows and even got the chance to perform. But more upsetting than the welcoming of Brown back into the spotlight was the public’s response to his ‘comeback’. Twitter was all ‘a-flutter’ with teenage girls Tweeting things like: “Call me crazy butttt I would let Chris Brown beat me up anyyy day” and “Dude, Chris Brown can punch me in the face as much as he wants to, just as long as he kisses it (:” (Buzzfeed.com).

I wonder where these girls learned to accept abuse, and even glorify it? Surely it wasn’t the media and films like Twilight that influenced this…

Can we say that watching Twilight will make a girl enter into an abusive relationship? No. And can we say that watching a music video that promotes a passionate, yet obsessive and violent relationship will cause girls to seek out an abusive relationship? Possibly, but most likely not directly. What we can say is there is a link – a link between teenage girls watching movies like Twilight and music videos like “Love the Way You Lie” and then tweeting “Chris Brown could serenade me and then punch me in the eye. I’m down for it”.

The problem is not so much that these movies and these songs directly cause girls to become victims and to seek out abusive relationships; the problem is that these messages desensitize young girls towards abuse and give a false impression of what love and relationships are supposed to be. They shift realities and offer blurred messages that can have frightening and even deadly consequences. It is not unlike the effects that Photo-shopped images have on a girl’s (or guy’s) self-esteem – they may not directly cause body image issues and eating disorders, but they definitely alter our expectations and understanding of reality in a harmful way. This cannot be denied.

But what can we do about it?

The first step, as with anything, is to educate ourselves as consumers; it is important that we maintain a critical eye (and ear) and that we don’t allow ourselves to become desensitized towards abuse.

More importantly, we need to protect our definition of love. In this course we were asked to read Who Gets to Narrate the World by Robert E. Webber. In this book, Webber talks about the ‘loss of the Christian narrative’ and how in order for us to stand a chance we must regain that narrative. I think the same applies here. We are losing our ‘love’ narrative and we are losing it to the media. The media is trying to redefine our definition. In order for us to regain control we must, as Webber suggests, ‘regain our narrative’ and defend it – clinging to it with all that we have. The Bible is the Love narrative (1 Corinthians 13 offers the perfect definition) and so we need to regain this and hold onto it and not let the media (or anything else) redefine it. Then, and only then, will we stand a chance against the monsters.

Tagsmedia + pop culture relational health
FacebookTwitterPinterestLinkedInRedditEmail
SITE DISCLAIMER: The opinions and information shared in this article or any other Content on our site may not represent that of Libero Network Society. We hold no liability for any harm that may incur from reading content on our site. Please always consult your own medical professionals before making any changes to your medication, activities, or recovery process. Libero does not provide emergency support. If you are in crisis, please call 1-800-784-2433 or another helpline or 911.