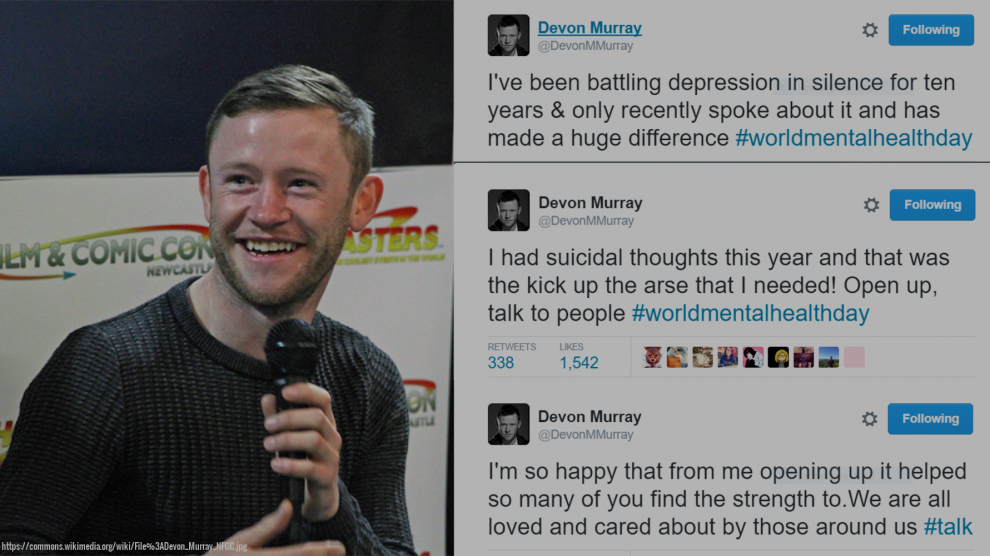 Harry Potter actor Devon Murray who played Seamus Finnigan in the popular film series opened up on Twitter about his experience with depression and received overwhelming support from fans.

Harry Potter actor Devon Murray who played Seamus Finnigan in the popular film series opened up on Twitter about his experience with depression and received overwhelming support from fans.

The actor posted the following tweets on October 10, 2016, in honour of #WorldMentalHealthDay:

I had suicidal thoughts this year and that was the kick up the arse that I needed! Open up, talk to people #worldmentalhealthday

If you suspect a friend or family member is suffering in silence #ReachOut to them. Let them know you care #worldmentalhealthday

The tweets were followed by overwhelming support from Devon’s followers, and also encouraged others to speak up about their experiences with mental illness.

Devon, thank you for being so brave and sharing. I suffer from depression induced by PTSD & it's nice to know we're not alone.

I've been battling with depression for almost 20 years and had suicidal thought. I'm on the mend. Keep up the good work.

me too for 5yrs silently, only when I admitted it & sought help did I conquer. still shows sometimes, unseen scars but I win.

know exactly how you're feeling. I've been at this point too. Stay strong. It's not easy but remember, that you're not alone!

Following the support from followers, the Harry Potter actor tweeted:

Wow!! After my tweets regarding my own #mentalhealth the amount of people saying I was the first person they told about their own is amazing

I'm so happy that from me opening up it helped so many of you find the strength to.We are all loved and cared about by those around us #talk

I'm also so thankful for all the kind messages of support yesterday. So much love for you all ?

This once again shows that in the world of mental health and struggles with mental illness, we are not alone.

It is encouraging to see people of influence stepping up and speaking out. Everyone has a story and a voice that deserves to be heard.

The more we talk, the closer we get to ending the stigma surrounding mental illness!

Tagscelebrities featured media + pop culture mental health
FacebookTwitterPinterestLinkedInRedditEmail
SITE DISCLAIMER: The opinions and information shared in this article or any other Content on our site may not represent that of Libero Network Society. We hold no liability for any harm that may incur from reading content on our site. Please always consult your own medical professionals before making any changes to your medication, activities, or recovery process. Libero does not provide emergency support. If you are in crisis, please call 1-800-784-2433 or another helpline or 911.