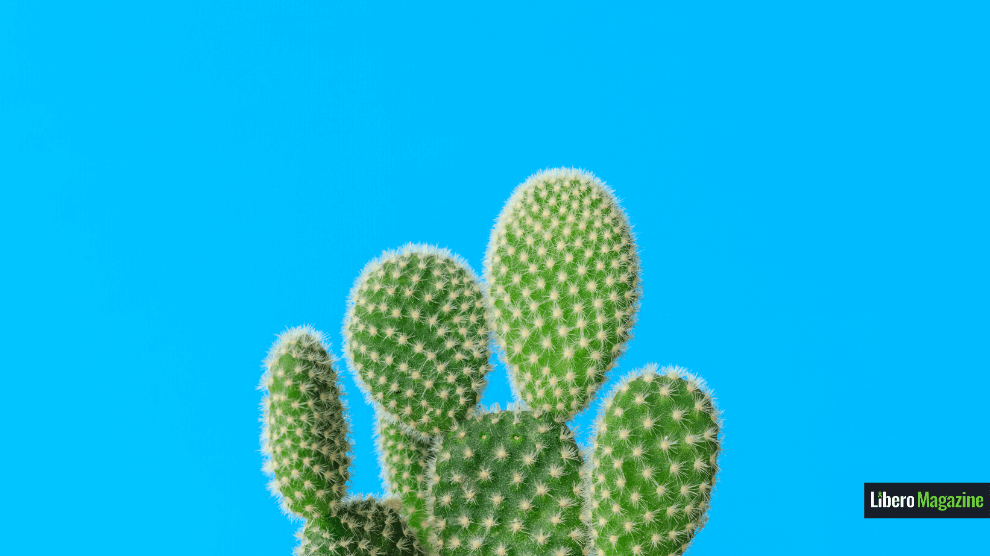 This may have just been what was needed to spend the remainder of quarantine with a thoughtful focus on things other than moving and doing.

As I drove down the narrow road to the back of the hospital toward the ER, there they sat, the “tents”. The general ER parking lot had been converted into a sea of about half a dozen long rectangular ventilated tents, all surrounded by tall chain-link fencing topped with barbed wire. A tall, large framed, uniformed police officer sat posted at the makeshift entrance, face buried in his phone, next to a hand drawn banner that read “Thank you to our healthcare heroes!”, which sat nestled in between two lengthy lists of “Respiratory Isolation Rules and Guidelines.”

I parked in one of the 5 parking spaces along the side of the building, pulled my hair up in a bun, put my disposable facemask and plastic gloves on and hobbled towards the ER entrance.

As I approached, I was met by a woman in powder blue scrubs, shoe coverings, elbow length gloves, and a face shielded helmet adorned with long tubes cascading down her back like thin braids. She told me sternly to stop where I was, roughly 15’ away from her, and shouted to me a series of questions that she warned me I would likely be asked multiple times again throughout my stay.

She then asked me to remove my mask and took my temperature. “98.2, you’re good to go,” she said casually as she pointed towards the Emergency Room doors.

I hesitantly entered and stood in front of a large hanging sign that read Admissions. 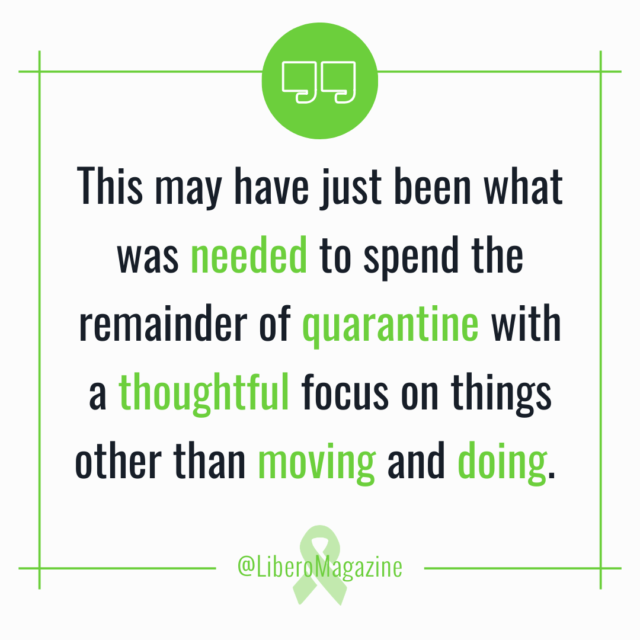 No chairs, staff fully suited in disposable blue scrubs, full face shields and helmets, gloves, plexiglass barricades in front of all the desks, rendering it impossible for anyone to hear each other.

“Have you been here before?” the nurse asked.

“Last year, you said?” We shouted back and forth.

“Oh sorry, it all sounds the same!”, she said with a frustrated smile.

We yelled back and forth for another few minutes then with gloved hands, I passed my ID and insurance card through the small opening in the plexiglass window. Next, another temperature and blood pressure check. “142/90. Hmmm, that’s high—probably because you’re here, huh?” the nurse said with an understanding laugh.

I had been in the ER for about 5 minutes before I realized I was the only person there.

The waiting area was usually flooded with people wrapped in blankets, cold, shaking. Injured, bleeding. There would usually be the occasional patient yelling at a nurse or rocking back and forth in a waiting chair. Kids would typically be playing, blissfully unburdened by the ability to fully understand the situation around them.

Now, as I looked around the room, it was completely empty. A ghost town. No chairs, no patients. No noise.

After my blood pressure check another nurse took me back into triage.

From my room I could hear two other patients, one seemingly suffering from some type of psychotic break, nurses rushed in and out trying to gather information as she sat loudly repeating, “Call the President, he will tell you who I am!” The second entered the curtained off area directly across from me and I could overhear the paramedic inform the nurse, “Respiratory issues, chronic and ongoing since 2018, non COVID-19 related.”

From where I laid I could hear the buzzing of the hospital staff, “She qualified for the tent this morning,” one doctor said to a nurse. “I thought she would, she’s been getting worse and worse since Saturday,” she replied. Two others sat discussing their lunches and another doctor explained to a small group that he was growing a COVID-19 mustache, a bet with his brother-in-law and cousins. Seemed like a questionable decision to me, but who was I to judge?

I was there, laid up, with a cactus needle embedded deeply into the bottom left side of my foot.

The needle had been causing me so much pain since the previous afternoon when I had accidentally hit my foot into it in the front yard while readjusting rocks over a bald patch in the new landscaping. Ridiculous I know, but this was no regular cactus. It was a golden barrel cactus, needles as thick as toothpicks and as firm as metal. Ribbed with teeth for holding on tight to muscle and tissue.

Instead of going directly to the ER after quickly realizing home removal was a futile effort, I hobbled around, finishing up some housework, cocktail in hand, hoping I could forget about it enough to make it disappear.

By the time I got in bed I knew something would need to be done.

That something consisted of two hours in the ER, three x-rays, one consultation with a podiatry surgeon, one 45 minute MRI located in the “COVID-19 Symptom Testing Site” building, two shots of anesthesia, 30 minutes of “foreign object exploratory surgery,” three stitches, 10 days of amoxicillin, twelve hydrocodone and twenty oxycodone, exactly two of which I consumed before deciding I would rather be in pain than feel whatever was happening to me on those pills, a three day headache, countless tears, a low grade fever for four days (obviously convinced I had contracted the virus during my time on the outside), 30 minutes of ice and elevation every other hour for ten days, one “shower shoe,” a dozen Band-aids, two crutches, and five or so meltdowns.

You see, not only is being injured, incapacitated, and quarantined particularly challenging but I had been waking up every morning since the Shelter-in-Place order went into effect in California on March 16th, between 5 and 6am, brewing a double espresso and running 5-6 miles, while either talking on the phone to my mom or listening to Crime Junkie Podcast episodes, before the sun and the rest of the world around me had risen, tucking safely back inside before 7 or 8 am, usually never having seen another person, even from a distance.

This routine was the primary thing keeping me sane during all the madness and all the devastation.

Well, that and baking, cooking and drinking, all perhaps a bit excessively. All things I love to do during regular times, but now had a captive audience to enjoy it with.

It had been exactly 35 days in captivity, roughly 200 miles walked, within a 2.5-mile area surrounding my home, of course. Also included were the 35 dinners cooked, the 7 cakes baked, the 3 batches of Toasted Brown Butter Bourbon Rice Krispy treats made, and the countless tiki cocktails created, shamelessly photographed and consumed.

Looking back, it all sounded like A LOT, and upon proper review, it WAS a lot. Likely too much.

I thought coffee and running were the things keeping me sane, when it turns out that it was likely the thing keeping me stuck in a vortex of fast-paced, overactive avoidance of actual and true calm.

As it turns out, a few weeks without so much as walking to the mailbox, without a smart watch telling me to get up and move, without the constant nagging in my head to do more regardless of my exhaustion, would serve me well.

These were the days of sleeping in and sitting still, stretching, writing, yoga, napping, and Netflix-binging without the small voice encouraging me to move more, to hit those 25,000 steps again today.

After a few days of furious rebellion, I began to create, to reflect, to embrace the stillness.

I wrote this and many other pieces I had been meaning to complete. I sat in the sun and drank tea, applied mud masks, made pancakes for breakfast, organized my jewelry, finished some art projects, mostly while lying in bed watching reruns of Sex and The City and She’s Gotta Have It, feeling calm, inspired and whole.

Excruciating pain aside, this may have just been what I needed to slow down and chill out.

This may have just been what was needed to spend the remainder of quarantine with a thoughtful focus on things other than moving and doing. A reminder to focus on the little moments, the slow, calm, safe, luxury of a comfortable place to shelter in.

If you found this article helpful, please pass it on!

Dealing with an Injury During a Pandemic

Journal Prompts to Help You Mentally Heal From 2020

What Does Fear Have to Teach Us?

Grieving the Myth of Security During COVID-19

Practicing Gratitude During a Global Pandemic

Why Doesn’t Grief Have to Social Distance?

How Self-Compassion Can Help You Cope with the Global Pandemic

It’s Okay to be Anxious During COVID-19 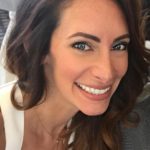 Website
Vanessa is a Licensed Marriage and Family Therapist and Forensic Psychotherapist with over a decade of counseling experience. She holds a Master's of Arts in Counseling Psychology from Sofia University, a Bachelor's of Science in Criminal Justice, a Bachelor's of Arts in Interior Architecture with a focus on Therapeutic Design and a Master's of Science in Forensic Psychology from The Chicago School of Professional Psychology. She is also a State Certified Medical Advocate, Crisis Intervention Counselor and a Certified Nursing Assistant, as well as an active member of The AAMFT, CAMFT, IACFP and APA. Vanessa maintains an independent private practice in Santa Cruz, CA. 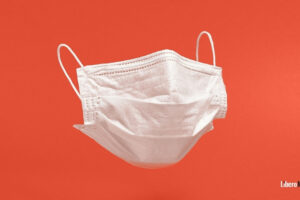 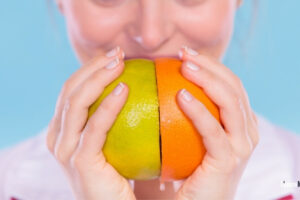 A Dietitian Responds to National Eat What You Want Day 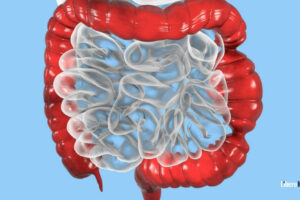 Practicing Self Care with an IBS Diagnosis

Candice’s Story: Free From the Opinions of Others

The opinions and information shared in this article or any other Content on our site may not represent that of Libero Network Society. We hold no liability for any harm that may incur from reading content on our site. Please always consult your own medical professionals before making any changes to your medication, activities, or recovery process.